When your Ex Marries his ‘Mistress’

What happens when you find out the ex who cheated on you is now marrying the girl he two timed on you with? Not only that, but if he also cheated on her..with you.

It’s something I found out a couple of weeks ago. After buying a flat in 2013 we are finally coming to the end of the most stressful selling process known to mankind, the future of ties will be fully severed at long last.

A couple of weeks ago during the selling process it came to light that the poor girl he was living his double life with, took him back and he must’ve begged for forgiveness so hard that he fell to one knee and sprouted a diamond.

So, the feelings one goes through when this happens? Firstly I had no hate, no anger, no upset towards him after our break up, I’ve had the best year of my life since not being in a relationship with him. However, after our four years together and growing in to my twenties with him, with no hint of marriage on the horizon for us after all that time, I must admit the first emotion I felt was rejection. Not because I want to marry the guy, but because the realisation kicked in that he didn’t want to marry me.

You get into a relationship with the vision it won’t end, in the hope that they are ‘the one’, we obviously weren’t right for eachother which I came to terms with, but it is a bit of a slap in the face all the same, albeit a diamond (more likely cubic zirconia) handed one.

The next emotion was sadness. I felt sad for her. She was played by him as much as I was. ‘But he’s my boyfriend’ she sobbed on the phone to me when we discussed the revelation of ‘he’s leading a double life, I’m so sorry’. Four or five months they were seeing eachother before she and I found out the other existed, and yet that seems to be long enough to realise she definitely wants him to put a ring on it.

Then I stopped feeling sad for her and felt a more ‘more fool you, you totally deserve to be played’ sort of emotion. I mean, who the hell takes back a man who cheats on you with a girlfriend of four years, has a house with and is in the forces working away for most of the year, after just four months of sleeping with him? A foolish one. I really would understand it more if they had met, he told her he was in a relationship but didn’t love me anymore and planned to leave me, because that’s love and sometimes these things can’t be helped, at least they both would have been honest with me and most imperatively, to eachother. Or if she got pregnant, that’s another valid excuse to marry him. But to be cheated on and marry him, I don’t get it and if I were her family and friends I would be all up in her grill telling her she has a screw loose. (I couldn’t think of a non-gangster way to get across what I meant)..

It’s at this point where I’m supposed to say ‘I wish them all the happiness in the world and really hope he has changed for her sake, and I’m sure they will live happily ever after and have cute crooked nosed (his genes) children’, but I’m going to be honest. I hope she wakes up before the wedding day and realises what she’s doing before she turns into a possessive wife who challenges his whereabouts at every ‘working late’ excuse. A leopard doesn’t change it’s spots as far as I’m concerned, put it down to experience, or if you are one that has changed, then amazing, but I’m yet to be proved wrong.

Update- this post was shared on Elite Daily and off the back of it I received some very heartfelt messages from strangers. I only recently found these hidden in my Facebook Message requests and wanted to post two which touched me the most. I am so happy that I could have shared my story to inspire others going through such a tough time. 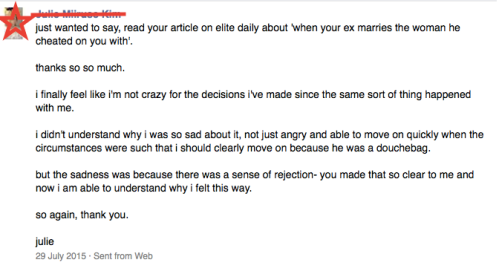