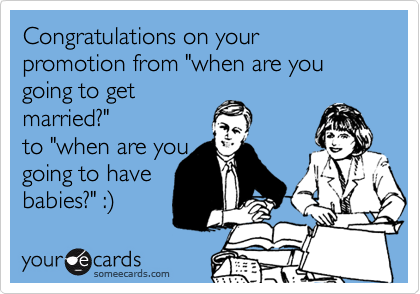 My brother and I went to our hometown in Devon this weekend for a break from the stress of a busy working week in London. I needed some smog free Devon air and family time. What I got was a storm and family question time, the weather wasn’t great either.. ‘How’s life?’ turned into a barage of: ‘When are you going to have a baby?’ ‘What does your future look like?’ ‘It’s a leap year this year, why don’t you propose?’

What my brother got: ‘How’s your business going?’, ‘How was your holiday?’ ‘How’s your new flat?’

I’m 31 and the majority of my friends back in Devon are on their second children, all are married. I love them and their kids dearly but I am not them, nor do I want to be.

I left Devon aged 18 for uni, moved back after uni for 6 months then moved away to begin my career without looking back despite missing the famous, now flattened, sand dunes and friends I frequented them with.

I’m happy, content, of course at times I’m stressed and have wobbles, don’t we all? Life is not easy, London is fast-paced, my job is a tad crazy, but I wouldn’t change my life.  I’ve got a step-daughter, a loving partner who is himself working round the clock to create a future for us, and he wants to get his career in order before we move to the next step. And you know what? I don’t want it any other way. So, why is it okay for families who supposedly love and support you no matter what, to ask so many pressurising questions? Meanwhile, my brother is 28 this year, never been in a relationship and is also content.. yet my family never ask him the same questions they ask me.

One answer is probably the obvious biological clock conundrum. Personally, I don’t even know if I want children. And yet I’m scared to seriously tell my family that. When I say I’m not too bothered about kids they reply with ‘you’ll feel differently when you have your own’. I’m sure I would, but would they be happy if I end up having children purely for their sake and not my own?

I’ve written before about what illustrates the ‘best age’ to have a baby, and the differences between Millenials (a word I loathe but an era that I do fall into) and their/our baby boomer parents. But as a recap, research on a lot of varying factors including socio-economic, health etc has basically said that 34 is the optimal age to have a child. 26 biologically, but again if you’re an obese 26-year-old smoker with diabetes, you’re arguably less likely to get pregnant and less likely to have a healthy baby- all statistics. However, you could also be a totally healthy 40 year old and have the perfect spawn. So age, really, is a personal matter.

I also know friends who have just got married and the immediate next question from family is: ‘When are you going to try for kids?’ For god’s sake just let them enjoy marriage for a bit, you know? Be that a couple of months, couple of years, maybe they don’t even want to try. This constant expectation for the next step is a societal factor that we need to snap out of.

Secondly is the generational difference. Our parents, and certainly our grandparents’ generation had the expectation of marriage and children fairly young, as a marker for success. Houses were affordable, there was no internet, often families were friends with other families who introduced potential suitors to their daughters, and that was that. Married forever; happily or not is debatable.

Nowadays as we all know, houses aren’t affordable, mortgages are seen as a liability; the job market isn’t secure and many stay in jobs they hate because they have a mortgage to pay. Social media is rife, Tinder is rife. People are constantly looking for the next best thing, instant gratification rules minds. Divorce hasn’t halted. But it’s hard for our grandparents to fathom because they live in their mortgage-free houses with their life partners just wanting the best for the rest of their family. The difference is, their version of ‘the best’ can be different from their offspring’s.

The generation born in the late 50s/60s is slightly different. 43 percent of the 344,334 UK couples who tied the knot in 1983 actually got divorced, compared to just 27 per cent of marriages from 1963. And yet, according to the ONS who reported the figures, those who got married later in life tended to have longer marriages! This backs up my own opinion that waiting for the serious stuff doesn’t mean you don’t care about your future. Those married in their early twenties have consistently had a higher divorce rate. Now, I know I’m 31 and not in my early twenties any longer, but I’ve now surpassed the statistic of being on my first divorce at least.

I got home from my weekend in Devon feeling like I had more stress than I went with. I love my family so, so much and know they just want the best for me, but justifying myself and my life decisions made me think that I cannot be the only one getting these questions. I did a bit of research, and it’s not just me. Of course it isn’t. I know the questioning comes from love, and it’s all down to how one reacts to this kind of family love. My reaction is this blog post.

Moral of the story; next time you’re being questioned about your future by your beloved family. Tell them although you love them dearly, your life and life choices are just that. Yours.

Filed Under: Dating and Relationships