The Best Things About Being Single 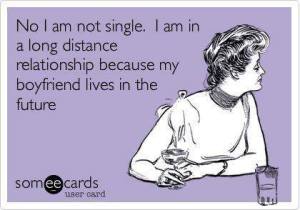 I was in a three year relationship, single for nine months then back into a four year relationship topped with mortgage and cat. It’s been two years since my singledom (single freedom) began and I have loved every single (no pun intended) second.

I’m not being bitter and trying to offend all my friends and those who are in relationships, as I think relationships are great. I have many married and settled coupled-up friends who are happy as Larry and I would never tell them that being single is better than being in their relationships. So this post is for single people (please don’t blame me for break-ups after reading).

Let’s talk about the bed situation. We have it all to ourselves (apart from the odd Saturday morning when we’ve woken up with an arm and a leg sprawled across a visitor), but the majority of the time we can starfish the shit out of our Egyptian cotton. Wriggle room a-plenty. We can also stay in bed as long as we like on Saturday mornings without feeling like we should really be making the most of the weekend off together with our other halves. Just you and me, beddy.

No one to Answer to

Remember the days of ‘what time do you reckon you’ll be home?’ texts. Gone are those. We can rock up at 4am and sleep on the doormat for an hour before stumbling up the stairs and on top of our beds (because sometimes we don’t have the capacity to pull the covers over us after drinking) and no one will demand the bloody Spanish Inquisition as to where we’ve been and why we didn’t let them know.

A lot of my friends have dedicated date nights and dedicated friend nights. I just have a ‘yes’ ethos. My diary is busier than Piccadilly Circus because I find it hard saying no when someone wants to do something. I have options most evenings which I have the choice to pick from, if I’m asked to a launch party on the day, I don’t have to let my boyfriend down by choosing to attend that over Nando’s with him. No guilt= good times. I must also add that I do like a night in, I mean I cherish those nights. Going out all the time is fattening.

This is our time to learn what we like and what we don’t like in the opposite sex. Dating’s purpose is to essentially find a potential life partner, but we rarely find them straight away. A diamond in the rough takes a lot of time to source, and during this period of singledom we will come across and meet an array of people who we learn from. Mainly ‘we never want to date a weirdo like that again’ but we still learn. We will meet people in various ways, some we have a lot in common with, some not so much. Even if it’s discovering that we’re attracted to someone with an interest in Ornithology, who new!

Now, before you start, I know you can travel with your partner. It’s one of my goals to travel the world with my future boyfriend/fiancé/husband/morelikelycat, so I’m not saying you can’t do that without having the best time. I’m talking about holidays, travelling with friends, doing everything you want without having to be aware of and think *I shouldn’t really go to this club in Bali tonight because I know the guys we met at the airport will be there and I will find it hard to resist temptation * .Get it out of your system while you’re young and single then you won’t have any regrets or resentment when you settle.

These are just my personal bests from single life. There are many more and there are obviously disadvantages to being single as well: wedding invites -1, being the third wheel to your loved up couple mates, sex is no longer on tap (unless you put out easily, but no one wants to be riddled so maybe steer clear of being easy), spooning, stealing food off their plate…the list goes on. But while you’re single you shouldn’t be sad about these things because you’ve either already had all that and it didn’t work out for a reason, or you’ve got it all to come with someone made for you, all in good time.

In the meantime, squeeze the crap out of single life, live it to the full and make the most of it because chances are you won’t be single forever (unless you’re a total twat). 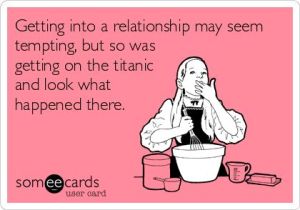 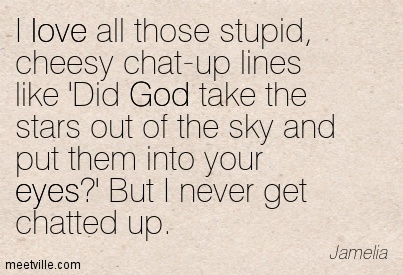 “You must meet so many guys being in London?” a friend of mine who doesn’t live in London asked. Short answer, no.

I mean in the literal sense, yes of course I meet males, daily, I work in a male dominated industry (then again what industry isn’t?) and my female to male ratio of friends is about 50/50. But in a romantic sense, no. And I’m not the only girl to have this ‘problem’ I mean there isn’t a *shortage of men epidemic in London*, in fact there are 155 men per 100 women in the City of London alone, according to the Future Foundation think tank (June 2014). So what I want to know is, why the hell do my friends or I never get chatted up (by normal men)?

Now before this sounds arrogant or ‘poor me’ ish, and you’re thinking ‘alright love what do you expect, hoards of Armani models falling over themselves for you?’ No. I’m no Michelle Keegan, but I have some really bloody hot friends, and they all, every (literal) single one has said they never get chatted up when out.

Firstly, let me make it clear that I am not desperate for a boyfriend, or to settle down. I’m no longer on dating apps (as you can probably guess from my lack of dating posts, soz fans) and I’ve only been on one date this year, which has probably outdone my two years of dating thus far, but I won’t go into that because you’ll all get far too jealous and my head is big enough about that one.

But to juxtapose this statement of ‘I’m not looking’, I also am not closed to the idea if it happens. For example if Channing Tatum was sans wife and beautiful child and asked if I would consider dating him, I would start wedding dress shopping. If something happens and feels right (or if said date proposed) I won’t fight it ;p

Second of all, gaining the right kind of male attention is what I’m talking about. The majority of my nights out, granted, consist of dining with a girl-friend then maybe a drink after at a bar, before collapsing in (my) bed by 11 with a stomach full of Malbec and three courses worth of food. So no I don’t expect to meet the man of my dreams while chopsticking my sashimi in a restaurant on the next table. But there is the odd occasion I do go out- out. It is on these odd occasions one would expect to engage in intelligent (drunken, tequila fuelled) conversation at the bar with males. Alas, no. The majority of the sorts of guys who have (rarely) approached me have not been my type (they’ve been absolutely blotto’ed, or mingers, or blotto’ed mingers and I’ll have to pretend I’m engaged or a lesbian to get rid.)

In example. On Saturday night I went out out. I was with a babe of a friend and we were in a rather male dominated bar. The only guy I spoke to all night in said bar was my first ever Tinder date whom I randomly bumped into. Side note: The reason we didn’t have a second date was because we both turned up wearing nigh-on identical outfits: a Barbour jacket, burgundy jeans, suede camel shoes (though to be fair mine were wedge boots), so from the get go it was awks, though we clearly both have amazing style…

We spotted eachother on the dance floor and I introduced him to my friend and relayed the awkward first date story, which luckily he found hilarious as well (and he’s not a minger) but that was the end of that. We all got our separate Ubers home and I was in bed prepped for another hangover as the sun rose.

Now I don’t complain about these things without getting both sides to a story. So being lucky with having male friends who are totes honest, I put it to them.

Ladies this is interesting so listen, the feedback I got was.. guys are scared of rejection:

“If I saw a worldy in a bar, to be honest I would assume she was definitely not single, and if I went up to her and she told me where to go, then my ego would be shot to pieces.”

“I play it safe and either go home with someone that was clearly eyeing me up all night, who usually would be average, or wait for a girl to approach me. If she’s a stunner then it’s a bonus.”

So why do we girls have it in our heads that the chatting-up etiquette should be the guy who has to approach the girl?

For me it’s a tradition thing, as a woman I was taught (by my dad, ledge) that we should be courted, chased, be worked for. But it’s modern dayz init, and guys seem to be lacking confidence and fearing the lack of the unknown. With social media and the likes of Tinder and Happn dominating our ‘dating’ lives, people are hiding behind online personas. When we are faced with the real thing, we freeze, we don’t know how to deal with it unless we’re absolutely smashed. Which really is quite sad.

But I also get the rejection thing on a man’s part. Thinking to my lesbian or engaged excuses, if the guy knew that I had made such an outrageous excuse to not give him the time of day, he would probably not have chatted the next girl up out of fear of rejection.

So to conclude, ladies if you’re not getting chatted up, maybe bite the bullet and make eye contact. If they don’t do it back, move on. Don’t force it, things happen when you least expect it. You might not meet the man of your dreams on a night out anyway. And I probably need to take my own advice.