Ghosts Can Also Be Female 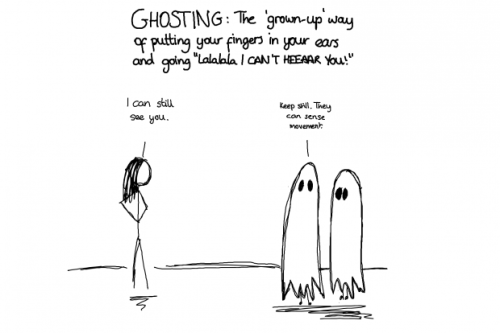 When I received the below from a friend I was relieved, because it means I don’t have to write about it. I’m known as a bit of a serial ghoster and the reason is because I’m too much of a coward to tell these guys that I just don’t ‘feel a spark’, because it sounds like such a cop out. The easy way out is to ghost someone- meaning just completely ignore them, don’t reply, don’t acknowledge their existence. It’s mean, cruel, and I would hate it if someone I liked did it to me, but I can’t face someone and let them know I’m just not that into them. It’s better for them to think I’m a bitch than to burn their ego face to face. So guys I’ve ghosted, RIP. Enjoy the below..

‘Ghosting’ is terrible isn’t it? Only fuckboys and cold, heartless idiots ghost people, right? I’ll admit I didn’t even know what ghosting what until the author of this blog explained it to me. Since then I’ve read articles on types of ghosting, why people ghost and how to get the ‘power’ back from a ghoster (FYI, that last one is complete crap).
The thing all these ghosting articles had in common was that it presumed the ghost was male.
And then I remembered; I’ve done this. It was a year or two ago, before the term had even been coined.
I started texting and then dating a guy that I’d known from university. We had known each other as friends of friends at Uni and he’d been widely regarded as good looking, a ‘regulation hottie’ to quote Mean Girls. He’d had a long term girlfriend at the time though, and we’re good girls – mostly – so he was off limits.
But he was now single so we dated, we had a lot in common, it was fun…and then I stopped texting him back.

He’d try to arrange a date, and I didn’t answer. He’d send me cute messages asking me about my day, no reply. In the end, he text me, all fake lighthearted, full of unnecessary smilies saying he realised I wasn’t replying. He confessed he really liked me and wanted to   see me again, but if I’d lost interest then ‘no hard feelings’.

Only I knew there were hard feelings. Still I didn’t respond. So, why had I done it? He was lovely, intelligent, caring and attractive…and I didn’t fancy him. The only way I can explain it is that I think Mila Kunis is fit but I don’t want to have sex with her. I hadn’t realised when we first were dating because the concept makes me nervous and so I presumed the butterflies were 50/50. Turns out, they were 100 per cent nerves, and nothing else.

I know I should have told him something polite like we had no chemistry, or I didn’t think we were a good fit, or a total lie like I was emigrating. But I knew he’d either ask awkward questions, try to persuade me otherwise or see right through me. The truth was, I didn’t fancy him and how do you tell someone that without offending them? It’s an ego basher. I knew I’d probably never see him again so I thought it better that he hates me. Maybe ‘closure’ would’ve helped him, maybe I was selfish but next time someone ghosts you or your friend, consider that maybe, just possibly, they thought they were saving your feelings. However misguided. Or, you know, they’re a fuckboy/girl.