One of my new year’s resolutions for 2017 was to learn to say no to things without feeling guilty for doing so. This has meant I’ve successfully declined many ladies nights, brunches, nights out and even birthdays since 1st January. I used to feel so guilty for turning down events, so I’d end up attending everything I was invited to and thus burn myself out to the point of collapse (many times). After ending up in hospital at the end of last year with doctors orders to rest once I’d told her my typical weekly routine, I decided to listen.

This year after vowing to learn to say no, and sticking to it, has meant my quality of life is so much better already. I’ve lost over a stone from the lack of drinking or eating crap (as a result of all the drinking), I’ve been sleeping for at least 8 hours a night and working out six times a week without feeling lethargic.

The main reason for the health kick was after I agreed to take up an 8 week challenge with my gym- F45, and if you’ve been following my weekly posts then you’ll know all about it. (Sorry to those who are missing my unlucky date escapades, I’m not).

Before this challenge I was doing the same amount of exercise thinking if I worked-out then it would balance out all the partying and odd (frequent) glasses (bottles) of wine with dinner, along with the brunches that I was smashing through each weekend intent on maximising buffet ROI. It was my first year into Dubai life, a continuation of the busy London life I lead, and I was just about managing it. Letting myself be the ‘fun one’ and loving life as per, and it’s fair to say if I didn’t exercise then I’d have probably been much bigger than I was. But I’d had enough.

This challenge has ensured I’ve maintained a positive mind-set. Every week I would see muscle definition, my clothes getting bigger, and it sounds so cliché but my head felt clearer. I was more productive at work, giving presentations and pitches to clients with more confidence and clarity than ever. As a result I’d billed the most business in the shortest period of time.

The final two weeks of the challenge I’d say were the hardest, not just because every time I saw my friends they’d be eating pizza or Five Guys while I had a tupperwear box of air, but mainly because the carb portions have been next to nothing in order to burn fat instead of glucose (carbs) as energy like a normal person. But it’s the point I’ve seen the biggest difference aesthetically.

I still have a little way to go before I’m entirely happy with my body, and I won’t lie, I’m really nervous about going it alone with no challenge to complete- but I am now determined not to go back to my old lifestyle.

As glamourous as it sounds, going out to all these luxurious 5* Dubai hotels for happy hours, dinners and brunches all the time, quite frankly, makes you fat. Caveat: Now I’m not about to turn into a preaching new clean eating health guru- because everyone knows I’m a party girl at heart and I believe a drink is called for to reach full fun potential in a bar/club scene – judge all you want, but we all know how shit it feels to be the only sober person at a party while your mates are having the time of their lives singing along to the Pina Colada song. I’m not the sober girl. I’m the one who instigates a messy night out, the one who suggests shots, the last one standing while everyone else went home to get pizza and into their pj’s two hours prior. And I’m still that person at heart.. hell I spent last weekend on a diet of champagne and chocolate to celebrate my body fat death, but now I’m that person much less frequently than twice a week.

The last two months has reinstated to me that my lifestyle wasn’t about balance before, when I thought it was. I was doing 50/50, that changes now to 80/20. 80% of the time being the health freak who trains 6 times a week while snacking on six cashews and almond milk protein shakes, and 20% of the time being the old, prosecco fuelled, fatter me.

My results saw me lose 7.5kg, 10cm off my waist, 6% body fat loss and two boob sizes which isn’t ideal but you can’t have everything. I went off plan completely for two days while I had visitors out, and completed 47 out of 48 possible workouts with one active recovery day per week doing aerial yoga. I drank on three occasions (awards dinner, hen party, one brunch) while sticking to the meal plan the rest of the time. 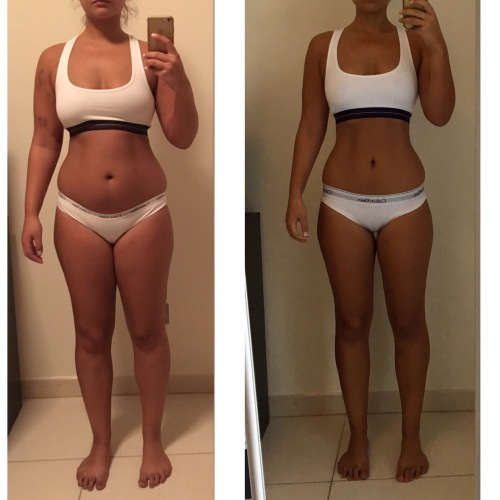 The most important thing I learnt from doing this challenge was to prep. Every. Single. Meal. That includes snacks, literally everything you put into your mouth, portion out and when you think one portion looks adequate, it means it’s too much. Halve it.

I have had a lot of people message me asking for advice, but frankly I’m not an expert, I’m just someone who got sick of making excuses for herself and did something about it. If you don’t want it bad enough, you won’t succeed, no matter what advice you’re given. I have always been the sort of person to work hard if I want something badly enough, be it that pair of shoes, or that apartment, or that job, it might take me a year to realise how much I want it, but once it’s in my head I bloody well work for it. There’s no such thing as luck in my eyes. The same applies when changing your habits, you’ve got to be dedicated, and yes it’ll take over your life for a bit, but what’s a few weeks of abstaining when you come out the other side with abs?

2 Comments to “The Grand Finale”